I have been getting prophetic dreams every week now, so there must be something going on.  Trump ultimately gets elected, that’s for sure, because too many people keep seeing this in their dreams.

Around 6-7 am, I had another Trump dream where he was in a large library with long tables and I guess I was a Page of his because I came up behind him through some books shelves – I’ve had 2 dreams now where I was so close I can tell you that he has a little mole on his cheek by his chin with little blonde hairs sticking out of it.  He had hand-written out a letter on some paper and wanted me to pass it down to a woman kind of heavy set, older, woman leader of a country.  I didn’t read it, but I just knew that it was very friendly, compassionate letter to a world leader and he had threw some of his own cash in it before folding it.  I don’t know how much it was but it was just sort of like a thank you note for something, and when I came up behind him he was just like a really loving person.  Whatever is going on is is definitely going to change him!  When I gave it to her she just didn’t even bother reading the letter because she was talking at the same time to a bunch of people, so I think she couldn’t just sit there and read the letter, but she took the money right away and she smiled and just continued talking.

I was woke up and I heard what sounded like a train from a distance coming closer up the tracks – a low, hushing sound and I listened to it for a while and then I realized it was the soft sound of rain gently hitting my roof and the sound of wind mixing together.  But suddenly I’m feeling a glory come upon me and feeling more excited and wondering what it is that is happening to me.  And then the sound got louder like a train approaching and I felt another Rush of Glory coming upon me, and now I’m getting even more excited.  And then the train sound got louder and I felt another Rush of Glory come upon me, and I got more excited.  By then it was absolutely pouring rain!  THEN I saw the reign (as RAIN) of God coming down over the whole Earth like in the days of Noah, and I’m practically ready to start screaming in my house “, Glory, Glory, Lord rain Down Your Glory, rain down the glory of your Holy Spirit that is coming, He is coming, He is near.”

And again I see rain that is liquid gold, so pure that it is translucent like a supernatural, liquid crystalline form.  And everything and everyone it touches is purified or made holy because it is so hot that it burns out the impurities so all that is left is the pure, the holy.  The Lord has shown me twice now that He is coming soon to do this, and the rain has already begun to fall.  If you listen closely you will hear it ALL OVER the world like it never has since the beginning of the Church, because “the latter rain” prophesied about in the Old Testament will be much greater before Christ’s return than the “former rain” after His departure, because it ushers in “The Marriage Ceremony with His Bride,” the Church.  When He left, He betrothed Her and promised to build a house and home for Her and He has – many mansions on a vast estate, in fact. Soon it will be time to take Her there for the final Marriage Ceremony. The betrothal, departure to build, processional return with all his friends, and taking the Bride away to her new home for the finalizing Marriage Ceremony is exactly the ancient Jewish marriage process according to the Law of God.

My wife couldn’t stop for 20 min on way to work yesterday praying in the Spirit, being repeatedly given the words of praise “YOU have STRUCK down the mighty.”  God is in more control than we see right now but it won’t be long before we really see it.  But many people we will never see again – they will be in military prisons or given new identities with new faces because they blew the whistles on very bad people and will be hidden under the witness protection act.  Some of these got caught up in the evil but now they have been convicted by the Holy Spirit and spilled the beans on many evil schemes.  Thank You Holy Spirit that you come to convict a fallen “world of sin, righteousness, and judgment to come.”

A lot of people are being fooled by the information they are reading, as it will be at the very end before Christ’s return:  DANIEL 12:4 says, “But you, Daniel, shut up the words and seal the book, until the time of the end.  Abundance shall indeed rapidly continually go to and from, and/coupled knowledge (gnosis or daath) shall indeed continue to multiply.” Hebrew for abundance = “abundant in quantity, size, age, number, rank, or quality.”  The imperfect tense with Polel stem of the Hebrew word means “to go to and from, go eagerly or quickly to and from.”  The imperfect Qal of multiply means “to continue to become many, become numerous, multiply people, animals, or things.  Hebrew daath or Greek gnosis means factual information, cunning, or skill.  It’s often used very negatively of the limited intellect, understanding, discernment, and wisdom of the world of men in complete contrast to that of God.

Yet Paul said he considered all this knowledge he had gained as a scholar under the greatest teacher of his day Gamaliel – like being at the feet of Socrates or Aristotle – as a pile of excrement (the Greek is more graphic, using the slang word of their day):  “Indeed, I add up everything as complete loss because of the surpassing worth of the knowledge (gnosis) of/belonging to Christ Jesus my Lord.  For His sake I have suffered the complete loss of all things and add them up as excrement, in order that I may gain Christ.”

Now the Lord gives me a revelation about this:  Satan knows what the Book of Daniel says about factual-information gnosis/daath knowledge rapidly flowing to and fro at the very end and he has manifested that through the internet, and now he’s using the internet to destroy humanity, using digital information that travels very quickly to carry out his lies, because he’s the father of lies, carrying out his deception over those who do not have a love for the truth.

The scripture says that clearly that “the deception” comes to those who do not have a love for the truth, which we know is Jesus Christ (John 14:6). Well he is using that to establish his kingdom on Earth and to censure or block the truth because he knows his time is near the end.  Just as the Book of Daniel correctly prophesied!  However, just as Satan didn’t understand that when Jesus came in to Jerusalem on a donkey he was not there to establish His kingdom at that time, but to bring into His kingdom all those who would have faith in His death.  Knowing the scripture about the donkey, Satan was doing everything he could to block the establishing of the Kingdom.  But he got it wrong because his pride blinds him!

In Daniel’s revelation everybody thinks that Daniel is talking about airplanes and people flying back and forth in the world, which it could be but more likely it refers to information, especially since the second half of the phrase describes the first phrase since they are coupled together with a coupling connector. The two are directly related so what is traveling very rapidly back and forth are not planes or people but it’s gnosis/daath factual-information.

Well, then some people say that is refers to the internet and that’s what Satan has created to establish his kingdom on this world.  All money transactions of all business are going more and more thru the internet and that’s how he’s going to establish the mark of the beast through digital technology, like Krypto currency like Bit-coin.  Well Satan can read and he has gone down this whole path to try to establish his kingdom and to censure/block what is going to come.  And it seems to be working!  But what he and many others got it wrong, but because of pride he/they will never believe the truth even if you showed it to them all day long.  They will say it’s fake news, propaganda, debunked misinformation, all the while pointing to the very people who are lying and calling them the fact checkers!  But the Revelation the Lord gave me about this “to and fro knowledge” is that it is the “gnosis information belonging to Christ” that Paul talks about, which is “divine wisdom and revelation from prophetic rhema words of God.”  This is what is going to “rain down upon this Earth” like napalm.  It’s going to be “fire from heaven like pure gold that is going to burn up the impurities on the earth.”  It’s the coming of the Holy Spirit, “the latter rain,” the tongues of fire to make anything holy. 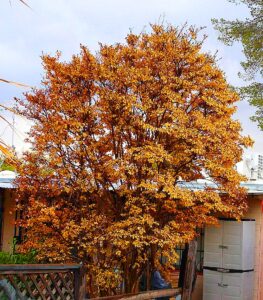 Gold – no coincidence!  I saw this out the back window as I was telling my wife the revelation.  It was in the neighbor’s yard, but as far as I could see no other trees around me had turned their leaves to this color yet because we haven’t had enough consistent cold weather.

As I post this on 3/1/21, I’m reminded to be patient for God to bring things about even if He gives us such urgency that we believe it is eminent.  God has a lot of pieces to put together, so we have to keep expectantly praying to see it realized!