Neglected Garden and a Faded Woman

Neglected Garden and a Faded Woman 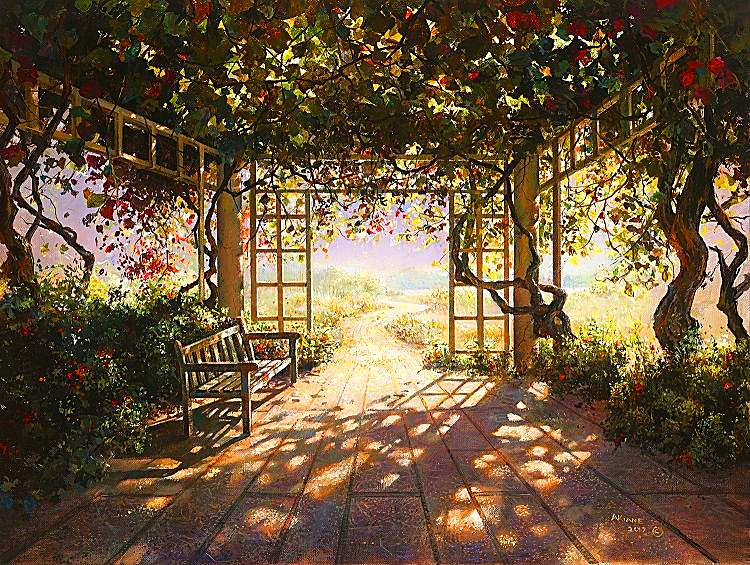 The Lord’s Gardens are Beautiful!

After waking, still lying in my bed, I couldn’t wait this morning to meet Jesus in His beautiful Garden He had shown me before in prayer visions.  So I put my pillow over my face to block out the world and went to the bright-white Door-Way He had showed me in previous visions.  I was told before that The Door-Way is Jesus, The Only Way to actually know the Father because He is The Absolute Truth about the Father and thus The Only Way to have zoe Genuine-Life.  Jesus said this in Matthew 7:14, John 10:7-9, 14:6 and that He was exclusive – “For The Gate is narrow and/coupled The Way is narrowly-confining that leads to zoe Genuine-Life and/subsequently few find it . . . Absolutely-in-fact-NO one comes to the Father except dia thru-the-realizing-channel-of Me.”  I really can’t see how the Inter-Faith movement gets around this!  How do churches get suckered into this?  All roads do NOT lead to God!  Anybody who has actually met Jesus will tell you this is a lie from the pit of hell!

I walked through the bright Door-Way, so bright that you could never see what is on the other side unless you go through the Door-Way.  Arm-chair spectators will never know The Truth until they go through The Door who is Christ.  They can never know what’s on the other side, even if they read the bible a 1000 times!  I expected there to be a pathway of green lilies with dainty white flowers and a yellow center that led into a beautiful forest as with my other Garden prayer visions, so soft that I am always barefoot.  Instead I walked out into a long narrow courtyard with ancient deep red brick walls on both sides that extended about 6 feet up.

A once thriving Garden was allowed to die:

The Garden plants were all dead, but you could see the debris where they once thrived.  There were many dead roses.  Cobwebs and leaves abounded.  There were also empty Garden tool shelves with molded leaves in the corner.  Above the walls were dirty white walls that rose high up with windows made up of very small panes of glass each the size of a brick.  It looked ancient!  The glass was caked with dirt so the rooms on the other side must have been quiet dark.  I asked if I were to clean it up and re-plant it, though I knew it would take a long time?

Then suddenly I realized I was looking through the eyes of another Man as He picked up 2 ancient, thick branches that had been previously nailed together to form a ‘T.’  He used it as a “crutch” to “lift up” Himself from working with the soil and cleaning up debris in this Garden Courtyard.  Then He “lifted the Cross up high,” and then suddenly out of the part where the 2 branches came together, a stream of Water poured out that He used to “wash clean” the windows.  It didn’t take much of this Water to make each pane as clear as crystal and then the Light streamed back into the rooms.  He also put Seed into the ground, used this “Water from the Cross” on them, and instantly a plant appeared.  He hung up shade cloth for some tender plants by using pure-gold acorns I saw in the corners of those tool shelves.  They supernaturally stuck like super-magnets to anything!  Then I saw Him put 2 security monitoring cameras on a shelf to keep watch over the Garden.

I asked what this place was?  The Lord said “It was the Church in the beginning, but it has been neglected for a long time.”

At the end of this long Garden Courtyard, I saw an ornate iron Gate, also overgrown with dead vines.  I went through it, anxious to see more.  It led down some narrow stairs, for “The Gate is narrow and/coupled The Way is narrowly-confining that leads to zoe Genuine-Life and/subsequently few find it,” as we saw above.  It intersected perpendicularly with a paved path-way traveling to the left and to the right.  It was high up on an embankment parallel to and overlooking the ocean, very much like the walk/skate promenades in many parts of California along the beach. 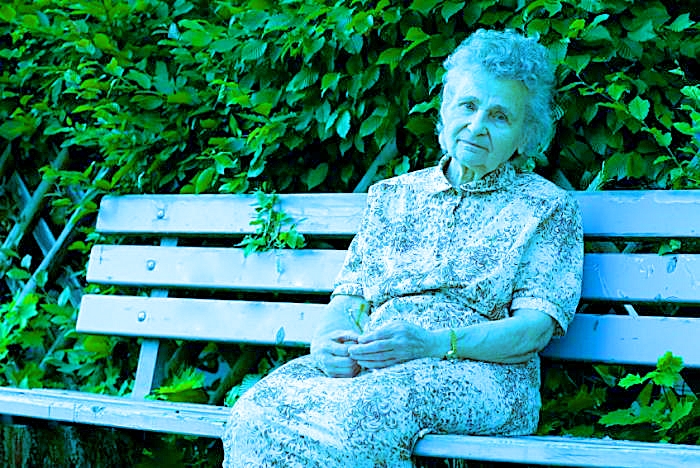 The Church faded by being “under the sun” while watching the world pass by:

I turned the leftward from the stairs and there on sitting on a bench overlooking the ocean was an old, heavy-set woman in a faded blue summer dress with lots of tiny faded flowers on it.  She said nothing, just staring at the ocean, and I somehow knew she was nostalgically reminiscing about “the good old days.”  I could tell that once she was young, beautiful, and full of Garden-like Life, but she had sat there so long watching the people passing by and watching the ocean at a distance.  I was knew from many other prophetic dreams & visions this was the unsaved world, the flesh, and the devil.  She had sat there so long that she had grown old, wrinkly, fat, and her ‘glory’ had all faded away by the “under the sun” beating.  This reminded me of the repeated phrase “under the sun” in the depressing book of Ecclesiastes in the Old Testament!

I asked who she was?  The Lord said, “It was once the Church in the beginning, but My glory faded from Her as she sat down close to home and just watched the world from afar.”  The Church had stopped feeding on Christ as “The Bread of zoe Genuine-Life” per John 6:35, 48 and drinking from the Holy Spirit as “The Living Water” of John 4:11, 7:38. Evidently, all the many Catholic “Masses” and Protestant “Lord’s Suppers” haven’t been very “Genuine” but only “a form/appearance of godliness that denies the power of it,” just as Paul warned in 2 Timothy 3:5 that many people would exhibit in The Last Days.

Then I saw another gate with stairs going down towards the ocean.  These stairs were much wider – for “wide is the gate and the way is easy that lead to destruction and those who enter by it are many.”  The ancient iron railings and lamp-posts were still leading so many to the ocean, the world of the flesh and the devil, into hopelessness.  But again, the class-rooms, businesses, and homes that lined this “way” all had filthy windows so very little light could enter them.  These stairs seemed endless and I felt more and more hopeless as they made their way closer to this sea of humanity controlled by the devil.

The Church has been stuck by it’s man-made wall for too long:

Apparently, the Church “woman” had first got “stuck” inside her house, so she failed to take care of the Garden, and then when she did get “out of the house,” she got “stuck” on the bench to the left of the gate to “the highways and byways” – “going left is always wrong” but then “sitting down on the job” and just watching the rest of the world decay really did Her in!  Even right outside Her house, She didn’t take the Gospel’s Seed out even to the Garden, let alone into the world to make new Gardens.  Nor did She use the Holy Spirit from the Cross of Christ to keep her own windows Holy, let alone the world’s!  Therefore the Light of the World, Jesus, could come into Her own house or the buildings of the world to cause darkness to flee – the world slipped into the Dark Ages and really never regained the Light of the first 200 years of the Church!  She just sat, grew fat, and faded “under the sun” in the world.  Really quite depressing!

My vision had gone an hour and I needed to get up for a bathroom break.  The last part really saddened me, so I asked the Lord to be with me later in the day to lift my spirits.  We’ll see what happens!

The positive part was seeing that although the Church had dropped the ball for being a spreading the Light into the dark world, Jesus is NOW personally re-planting the Garden and cleaning up the mess and windows of His Church for His Light to once again stream in.  So we will see more changes just supernaturally occurring as He resumes control.  And this Light will once again be shared to the darkened world!

Thank You for visiting:  Neglected Garden and a Faded Woman