You know I’ve been writing a lot about Zachariah 4:6 on the Might & Power page, which talks about how radical the New Covenant was going to be from the old covenant.  It was “no longer in fact going to be by might and power,” which are Hebrew words for the external resources and the internal abilities of man, but that it would be a completely different-in-kind, ‘new’ thing that is not new in time but completely different-in-kind.  And that is because it would be totally 100% “by MY Spirit, says the Lord.”

Now I’m wondering if that’s where we’re at now, that the old way of doing things that we’ve been doing for a long time in America is now proven to be an utter failure, and there’s no other way out of this except complete  destruction of the Republic, and a complete breakdown into complete lawlessness and Antifa/BLM anarchy.  Now we know that eventually comes because of many prophecies particularly about the lawlessness of 1st and 2nd Thessalonians and book of Revelation and what Jesus said in Matthew 24, but it is too soon because other things must happen and they have not happened before that demise occurs.

So that leaves just one one option:  The Lord is going to do a radically new thing that is completely illogical and not based on man’s might and power and will be so supernatural that we’re all left scratching our heads, just like the Jews at the Red Sea that Moses parts near their eminent death.  I don’t think any of us have a clue what that will be, just like they had no clue what it would be, only that they were given a promise from God that they would be saved and somehow the Red Sea was going to part but it has not parted yet, and apparently that’s where we’re at, we’re in the ocean up to our necks, ready to drown waiting waiting waiting, crying out to God for truth and justice, crying out for God to intervene. And if He does not intervene, then all the prophets are wrong and everything about Christianity is down the tubes, because thousands of people now have seen this, and there will indeed be a great falling away, but all for the wrong reasons, because we put all our hope and prayers in the Lord. That’s not why the falling away occurs in NT prophecy, that is for sure.

Concerning the X22 Report guy and the British guy Simon Parkes who appears to be about 12 hours ahead on deep intel through white-hat patriot hackers, I believe THEY said that this was not going to be what people thought it would be and I’ll be interested to see what they’re saying now about what’s going to happen in the coming days.  But you know I should know better that the middle of December was not “the great light.”  I saw it in January as did all these other prophets – it comes in January not in the middle of December.  We get our hopes up thinking this was going to be that.  This first appeal to the Supreme Court is not the one that wins and I believe that was predicted by many other analysts.

As I was writing this my wife called me because there’s a gigantic pink cloud above her and I saw this the other day right after getting a revelation and it’s actually much pinker!  This is a sign of great Glory coming!  It’s mostly on the horizon but it’s spreading across the sky. This is a very clear message that in this great darkness that there is a message that it is not going to last. 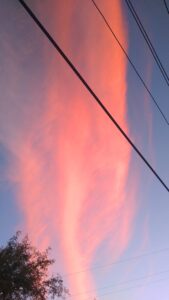 These pink clouds happened many times in January.  I’ve never seen anything like that in my life, and every time I witnessed them I could feel the Lord saying great glory was coming!  A giant cross formed in the sky: 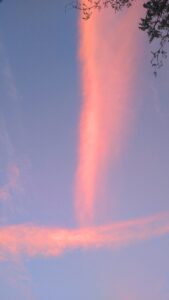 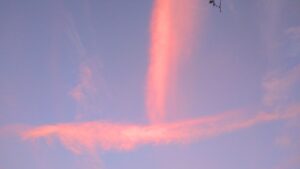 Then I saw a door open in the heavens, shaped like a funnel in the middle of this picture: 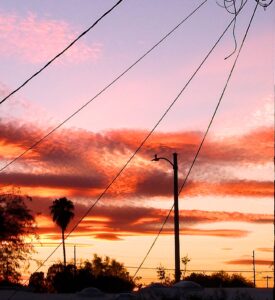 See how a horde of light patches are spreading out from the door in both directions:

Now the swarm is spreading out even more!  Glory, Glory, Glory!  Spread your glory, Lord! 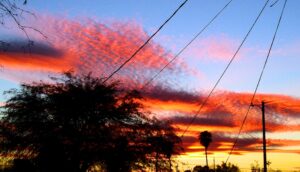 Conclusion:   A lot of people don’t read the oral Torah but it is a much more descriptive of the written Torah than the five books of Moses because the five books of Moses are considered “memory points” – written phrases to help the Jews remember the rest of the story, which was told for centuries and eventually written down.  THE MISHNAH says that when the millions of Jews were up against the Red Sea, God told them that Moses was going to hold up the staff and that the sea would part and that’s what we read.

However, the rest of the story is God had Moses raise his STAFF up and nothing happened, and there was a lot of grave doubt as they saw the dust clouds of the army’s coming closer and closer.  So eventually the people were in a panic and they had to start wading out into the water, their stuff was floating away, nobody drowned but there was great fear that that was going to happen eminently, and people were up to their necks in water and there were people holding Moses arms up because this went on for quite a long time as the dust clouds got closer and they were crying out to the Lord.  They were absolutely crying out for God to intervene and it didn’t look like there was really any hope, but they only had one direction they could go and that was into the water.

They were crying out to God, and the captains Caleb and Joshua were rallying the people to have faith in God, down to the last minute, and suddenly the waters part but it was down to the last minute.  Then the absolute impossible occurs as they are literally running across the strait, leaving things behind, running for their lives, and they get across just in time as the soldiers in the chariots get very close to them and then God closes up the waters and they’re all drowned, all the horses and all the chariots and a huge army all swallowed up in water and not one Jewish person was lost, not one.  Now that’s the adrenaline rush way God does things!  And you’ll see that all through the battles, absolutely insane odds that they should have any success and suddenly they have enormous success, and it’s truly irrational and illogical!

As I was posting this on 3/1/21, I’m just amazed how much the Lord calls for faith from us!  He gives us such powerful promises and experiences of Him, but we rarely see them come true very soon or in the way we think they will happen.  It’s always such a surprise, and often down to the wire when most “mortal men” have lost hope!  I still believe the Lord is not done with Trump and not done with His judgment of the extensive election fraud, media & big tech censorship, and corruption of our court systems.  And I believe America, even the churches, will suffer greatly at the hands of the Harris-Biden regime because they allowed such sin to take over.  But in their utter despair, great repentance and then revival will come!

Spiritual Education, Rhema Word of God, Revelation, Messages from God, Prophecy, Hearing God, Will of God, Dreams, Visions, Signs of the Cross in the Clouds, Signs in the sky of God’s coming glory despite the corruption and fraud in America