3-6-22 Revelation: Catapult of “Greek Fire” into the Enemy’s Camp 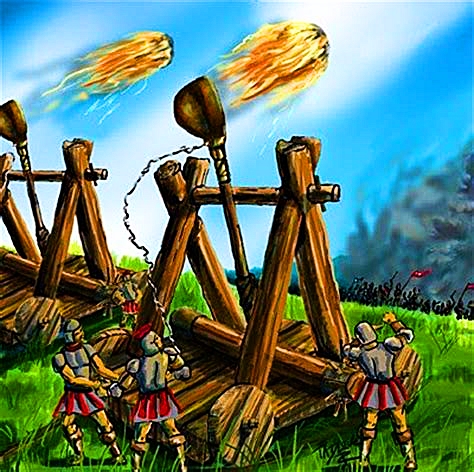 On 3/6/2022 I was praying in the shower about the Russian invasion of Ukraine and all the suffering.  I was also praying about why so much of Christianity seems difficult and that there had to be a better way to succeed in both of these situations.  Then I saw a classical or medieval catapult launching fire balls like “Greek Fire” over walls of the enemy that were so tall that soldiers were like ants and no ladders or other devices were likely to get over them.  Building a ramp would take a very long time as with the Romans in 72-73 AD with 15,000 men & women to lay siege to Masada on a cliff.  It looked impossible, but the catapults were burning the enemy camp from within!

I asked what the “fire balls” were that were exploding when they landed?  How can they defeat Russia with all their bombing of even civilians?  Our government regime and that of others seem to be very inept with major conflicts of interest – everybody has been paying Russia millions of dollars a day for their oil, supplying them everything they need for a war.

And the US is wanting to do the same for Iran after leaving billions of military hardware in Afghanistan for the terrorists to use or sell to our enemies to commit even more terror.  It doesn’t look like our country knows what it is doing, and when it acts, does “too little too late” to make any difference.  “God help us” is what I was praying!

Well, I was tired and asked the Lord to show me in dream.  In the morning I woke up to ‘see’ a lot more “fire balls” raining down on the enemy camp and wondered if these were are all from catapults because a lot of them were coming straight down.

I kept asking about all this and was told the “fire balls” was the supernatural enabling-power of the Holy Spirit.  And I thought “judgment of God,” but He said, “It’s always been the same – My love” which reminded me of other dreams and visions showing enormous power unleashed to supernaturally remedy what seemed like a hopeless situation. See the Godzilla of Sin Destroying the World dream.  See the Whole World trapped in an Insane Asylum dream. 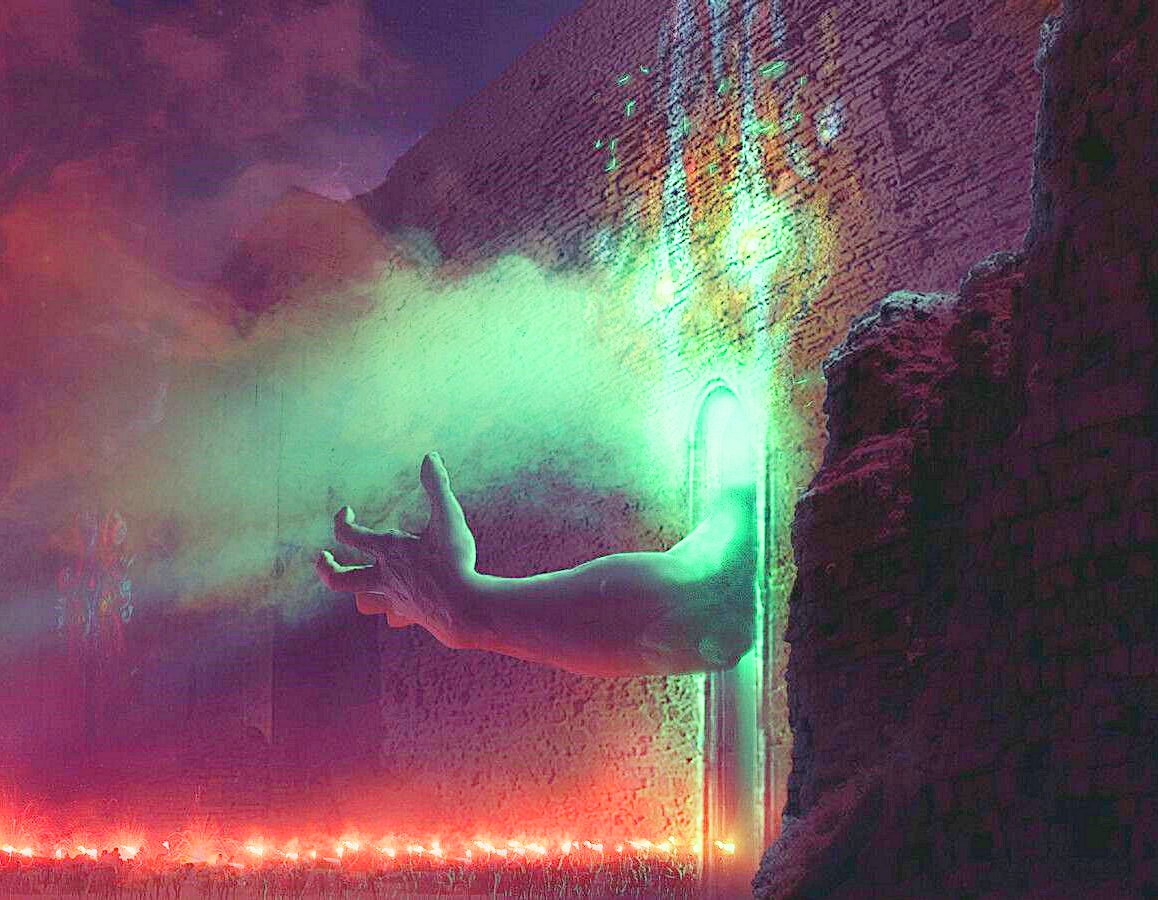 God is going to Break Down the Enemy’s Walls from within!

So apparently, even though Satan is using greedy, ambitious men like Putin to “steal, sacrifice for himself, and then utterly destroy” others, Jesus is still bringing “the superabundant zoe genuine-life” just as He said He would in John 10:10, by the means of these “fire balls” of divine unconditional-love.  God is doing incredible good for His kingdom of God on earth in the middle of Satan is using Putin to advance his kingdom on earth.  Of course the Main-Stream Media won’t show us this and neither will “Big Institutional Religion” that is also part of this world!

Then I asked the Lord, what is my part in all this that I’ve been praying for, and how does it relate to His answers about the enemy camps in the world?  God showed me that whether it’s “the world, the flesh, or the devil” the solution is the same:  “Constantly be launching the catapults of My unconditional-love.”  But how?

Then God showed me the words Jude 1:20-21 that I had studied for these BLOGS and He really gave me sunesis ‘connect the dots’ understanding-knowledge:  The way to obey the only imperative in Jude 1:20-21 of “[I strongly urge you to] definitively/wholly tereo ‘carefully watch/observe to safely-guard, care-for/attend-to, firmly-hold/stand-in/maintain-a-present-state,’ yourselves in the Unconditional-Love of God [by] routinely pros-echomai ‘warmly-welcoming by facing toward and reaching’ the mercy of our Lord Jesus Christ eis ‘toward and reaching the goal/purpose of’ zoe genuine-life everlasting [a reference to our acquittal at His return]” is by “routinely building yourself up in the most Holy Faith [by] routinely proseuchomai conversationally-praying en pneumati by-the-means-of the Holy Spirit.”  All the “routinely” participles tell you how to do something.

Ephesians 6:10-19 teaches us about Spiritual Warfare:  In order to “dunamai be-powerfully-enabled [by the armor of God] to stand against the schemes of the devil,” Paul teaches in vv. 17-18 to “dechomai ‘warmly-welcome . . . the sword of the Spirit, which presently/ongoingly exists-as/defined-as the rhema directly-spoken/heard word of God, thru-the-realizing-channel-of ALL proseuche conversational-prayer and/coupled deesis supplication, [clarified as] be routinely proseuchomai conversationally-praying in every season en pneumati by-the-means-of [singular] Spirit.”

We know from 1 Corinthians 14:14-15 Paul explicitly explains this: “For  if I should presently/ongoingly proseuchomai conversationally-pray [dative: by-the-means-of] glossa tongues/languages, [then] The Spirit of/belonging-to me is presently/ongoingly proseuchomai conversationally-praying” even as “the mind of/belonging to me is unfruitful/unproductive,” and the same is true for “psalming” with instruments whether lyrics are involved or not.  Paul clearly distinguishes either of these practices done by “The Spirit of/belonging-to me” with doing them naturally “by-the-means-of the mind of/belonging-to him,” and furthermore purposes to do both kinds, especially making the point of “praying and psalming to pneumati [dative: by-the-means-of] The Spirit”  Shouldn’t we do the same? 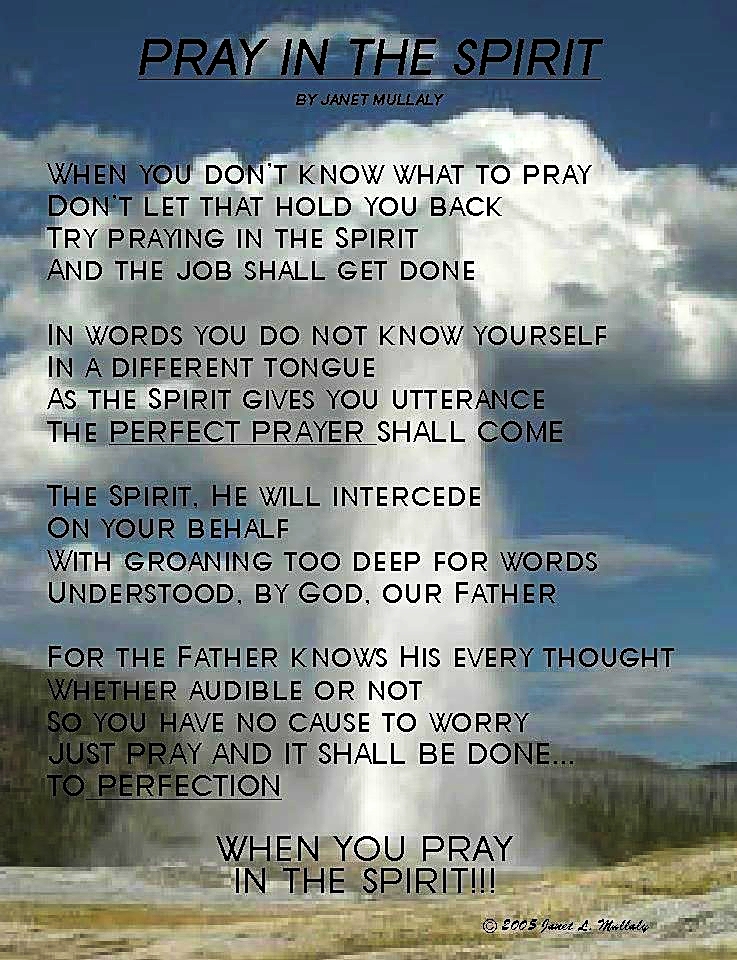 The Solution is Praying in Tongues

Then I remember an incredibly powerful class at a church I took around 2009 where we read and practiced the book The Walk of the Spirit – The Walk of Power by Dave Roberson, which was all about praying throughout the day in tongues.  For 10 weeks we all shared supernatural stories of power!  We felt like the Church had hidden the keys to the treasure chest!  See Tongues & Interpretation.

Thank you Lord for reminding me that I need to do this simple thing throughout the day to do my part in Your military campaign against the Russian government, the flesh, the devil, and all other tyranny and sin in this world.

Thank YOU for visiting: Catapult of “Greek Fire” into the Enemy’s Camp