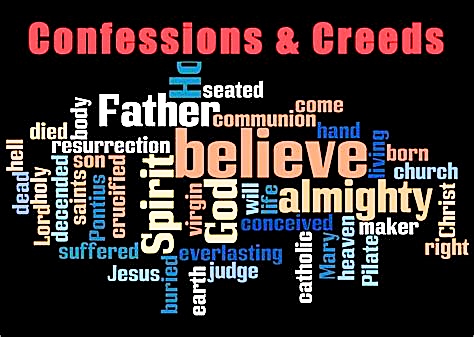 Christian creeds as confession of faith

The Early Christian Church – A History of Its First Five Centuries by J.G. Davies, p. 56 says:  The need for some kind of doctrinal summary, comprising the essential content of belief or the real center of the gospel must have been present from the first days of the Church. But although the early Christians may be said to have shared a common faith, they had NO single formulary or creed, in the sense of an official and textually determined statement. Nevertheless, there are in the New Testament indications that there was a recurring pattern of belief in quasi-creedal affirmations, liturgical tags, or catch-phrases . . . the confession of Christ being the essential element of their faith. . . It was in conflict with paganism that belief in God (and thus Christ) required to be expressed, hence the emergence of a bipartite and sometimes triadic formulae.”  For example:  “Hold-to the traditions which you were taught” (a), “obedient from the heart to the form of teaching wherefore you were delivered” (b).  These “traditions” or “form” was likely:  “Jesus is kurios Lord” (c) or “Jesus is the Christ” (d) and “begotten of God (e) because “Jesus is the Son of God” (f) or “Jesus is the Christ, the Son of God” (g).  Longer formulas may have included:  “Christ Jesus, that died, yea rather, that was raised from the dead, who is at the right hand of God, who also makes intercession for us” (h); “To us there is one God, the Father, of whom are all things, and we unto Him; and one Lord Jesus Christ, through whom are all things, and we through Him” (i); “The grace of the Lord Jesus Christ, and love of God, and the communion of the Holy Spirit, be with you all” (j).  <Notes> a) 2 Thessalonians 2:5, b) Romans 6:17, c) Kurios meaning Supreme Master: 1 Corinthians 12:3, d) Christos meant Anointed One, the Messiah: 1 John 2:22, e) 1 John 5:1, f) 1 John 4:15, 5:5, g) John 20:31, h) Romans 8:34, i) 1 Corinthians 8:6, j) 2 Corinthians 13:14.

180 AD Original “Rule of Faith” as Irenaeus knew it:

…this faith: in one God, the Father Almighty, who made the heaven and the earth and the seas and all the things that are in them; and in one Christ Jesus, the Son of God, who was made flesh for our salvation; and in the Holy Spirit, who made known through the prophets the plan of salvation, and the coming, and the birth from a virgin, and the passion, and the resurrection from the dead, and the bodily ascension into heaven of the beloved Christ Jesus, our Lord, and his future appearing from heaven in the glory of the Father to sum up all things and to raise anew all flesh of the whole human race…

180 AD. Old Roman Creed based on the original “Rule of Faith” becoming an early form of the Apostles’ Creed:

I believe in God the Father almighty; and in Christ Jesus His only Son, our Lord, Who was born from the Holy Spirit and the Virgin Mary, Who under Pontius Pilate was crucified and buried, on the third day rose again from the dead, ascended to heaven, sits at the right hand of the Father, whence He will come to judge the living and the dead; and in the Holy Spirit, the holy Church, the remission of sins, the resurrection of the flesh the life everlasting.

I believe in God, the Father almighty, creator of heaven and earth. I believe in Jesus Christ, God’s only Son, our Lord, who was conceived by the Holy Spirit, born of the Virgin Mary, suffered under Pontius Pilate, was crucified, died, and was buried; he descended to the dead. On the third day he rose again; he ascended into heaven, he is seated at the right hand of the Father, and he will come to judge the living and the dead. I believe in the Holy Spirit, the holy Catholic Church, the communion of saints, the forgiveness of sins, the resurrection of the body, and the life everlasting. Amen.

We believe in one God, the Father Almighty, Maker of all things visible and invisible.  And in one Lord Jesus Christ, the Son of God, begotten (or only-begotten) of the Father, Light of Light, very God of very God, begotten, not made, being of one substance with the Father; By whom all things were made; Who for us men, and for our salvation, came down and was incarnate and was made man; He suffered, and the third day he rose again, ascended into heaven; From thence he shall come to judge the quick and the dead. And in the Holy Ghost.

We believe in one God, the Father Almighty, Maker of heaven and earth, and of all things visible and invisible. And in one Lord Jesus Christ, the only-begotten Son of God, begotten of the Father before all worlds (æons), Light of Light, very God of very God, begotten, not made, being of one substance with the Father; by whom all things were made; who for us men, and for our salvation, came down from heaven, and was incarnate by the Holy Ghost of the Virgin Mary, and was made man; he was crucified for us under Pontius Pilate, and suffered, and was buried, and the third day he rose again, down-from/according-to the scriptures, and ascended into heaven, and sitteth on the right hand of the Father; from thence he shall come again, with glory, to judge the quick and the dead; whose Kingdom shall have no end.  And in the Holy Ghost, the Lord and Giver of life, who proceedeth from the Father, who with the Father and the Son together is worshiped and glorified, who spake by the prophets. In one holy catholic and apostolic Church; we acknowledge one baptism for the remission of sins; we look for the resurrection of the dead, and the life of the world to come. Amen.

As Christian musicians, do we want to just perpetuate “traditions of men” without knowing their original and the reason they came into being?  It’s important to note J. G. Davies above “the early Christians may be said to have shared a common faith, they had NO single formulary or creed, in the sense of an official and textually determined statement.”  Note also that that these formulas or creeds didn’t come into the Church until 180 AD and from that point they get longer and more theologically complicated and exclusive.

If you read Church history, the writings of the Fathers, and other Christian writings, you will see that the early stages of the Catholic Church formed exactly because the Church was falling away from trusting-relying-faith in the Holy Spirit and it’s supernatural grace-gifts and signs & wonders to keep the Church pure and devoted to Christ, free from doctrinal errors from the surrounding world religions and philosophies.  As they had less and less of God’s “by My Spirit” enabling-power and control, they sought to make up for it by exercising more and more of their own Zechariah 4:6 “might and power” authoritarian control and so they created the 1-bishop rule, dogma, apologetics, creeds, and theology so that they could classify people into “us versus them” categories – this is the basis of judgment, the opposite of Unconditional-Love – see Unconditional-Love – BT16.  This naturally resulted in the great evil of Catholic Church persecution of those that differed from the leadership.

A lot of people lost their faith after carefully studying Church history, because the flesh of religious people can be far uglier than the world’s!  I was quite shaken also, but I could see the reason they ‘slid down the slippery slope into the gutter’ was because of The Great Wall that quenched the Holy Spirit – they borrowed from the Old Testament and they borrowed from the world!  Shame, shame, shame!  Let’s not make the same mistake!  Let’s go back until back to 2 Corinthians 1:12 “we behaved in the world with simplicity and/coupled godly sincerity, not by human wisdom but by the unconditional-loving-favor-of-grace of God” and so it won’t be said of us like 2 Corinthians 11:13 “But I am afraid that as the serpent deceived Eve by his cunning, your thoughts will be led astray from a sincere and/coupled pure devotion to Christ.”

The very scribes and Pharisees that Jesus argued with, the so-called “wise and understanding ones,” these same types of religious people took the Church over from the “little children and other ‘least among you’ that the kingdom belongs to.”  By making it so complicated, they showed partiality and favoritism, the exact opposite of God’s nature!  Christianity didn’t need any of the junk the Catholic Church added to gain control.  All the Church needed was to stay meno connected-to Christ by staying surrendered to the control of the Holy Spirit to “produce MUCH fruit to the glory of the Father.”  See A 11-21-2021 Vision about Meno abiding.  But once you disconnect, you really “can’t do anything.”  Religious people can’t accept defeat because they are too proud, so even with poor results, they double and triple-down.  And that’s what made Church history a disaster!  We can learn from their mistakes.  That’s why so much revival and this website is going back to the simplicity of total surrender to the Holy Spirit to DO IT ALL.  All glory goes to the Spirit’s results!

Thank You Father for helping us learn from the mistakes of the Church in history.  Keep us from perpetuating so many false “traditions of men” in the modern Church. We don’t need to be history majors to do this – just tell us when these things are NOT from You but mere men, often men who have slipped away from hearing Your Voice by the Holy Spirit, men who then fall into the desires of the flesh for pride, money, and control.  Lord, we surrender all of us to You.  Thank You for making our Christian walk by the Spirit so simple that even little children and the other least among us see, enter, and get the secrets of the kingdom long before the so-called “wise and understanding ones.”  Praise Your name!