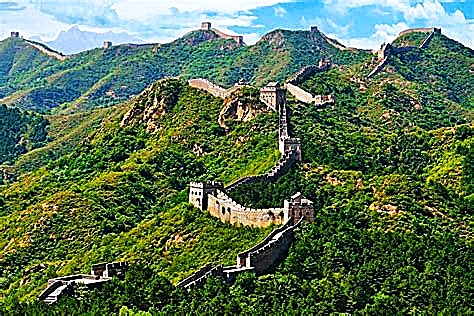 The stones that many of today’s churches are placing on top of the foundation borrowed from the old covenant’s commandments & rituals to build “The Great Wall” we saw Great Wall – BT1 are actually stones borrowed from the world around them. They are picking up “stones” from the world’s models of leadership and success, despite Paul’s warning in Romans 12:2 to “in-possibility-NOT presently/ongoingly suschematizo ‘have the outward schematic shape/form together-with’ this age.”

The so-called “leaders” don’t even know who God called His “ministers” – it’s not just the 4 groups of equipping coaches & facilitators (a), but instead ALL the saints that do the work of the ministry (b), as we saw in Great Wall – BT2!  I’ve seen this time and time again over 40 years of various ministries in 15 churches.  The Lord clearly told me, “There are no solo acts in My kingdom!”  He has said so much about Body-of-Christ ministry!  See also Coaches and Facilitators.

<Notes> a) the idea of a “5-fold ministry” is the result of poor bible-study.  Many Greek scholars see “shepherd kai and/coupled teachers” as 1 group because the first 3 nouns of “the apostles, de moreover the prophets, de moreover evangelists (messengers/preachers of the gospel)” are listed without punctuation or kai couplers and the 4th and 5th nouns (shepherds/pastors, teachers) are linked with kai which is normally a coupler when used only 1 or 2 times, as is the case here.  We have to remember from Ephesians 4:7-8, that these 5 nouns are NOT people, offices, or titles but only some of the plural grace-gifts of the singular grace-gift of Christ to the Church from the Father that is the Holy Spirit.  Also, Paul’s gives qualifications of “elders-shepherds-bishops/overseers who are able/skilled to teach” in 1 Timothy 3:2 and 2 Timothy 2:2, 24, giving those evangelizing and/coupled teaching double-honor in 1 Timothy 5:17.  Furthermore, Paul often uses “teacher” as a verbal-noun as in 1 Corinthians 12:28-29 that emphasizes the praxis functioning of it as in Romans 10:7.  Teaching is just a praxis function of every member of the Body-of-Christ by-the-means-of the Spirit’sgrace-gifts, but especially should occur with the singular elder/shepherd/overseer group of people – see Body-Ministry and Teach-One-Another pages, b) Ephesians 4:12.

It has grieved God’s Spirit within me to see so many people “picking up of the world’s stones.”  But “what koinonia fellowship-partnership has light with darkness,” the apostle Paul asks (a)?  This same “borrowing from the world” has occurred within worship music!  Because so many are so concerned about attracting larger audiences, “the ends have now justified the means.”  <Notes> a) 2 Corinthians 6:14.

The Petra “mass of solid rock, native foundational bedrock that protrudes from the earth, like a projecting cliff” that Christ builds His church on is definitely NOT Peter who Jesus named from his original name Simon that meant ‘to hear’ but was akin to ‘flat-nosed’ that in Leviticus 21:18 is the name of a deformity which disqualified a member of a priestly family for serving the altar.  Cephas in Aramaic means “a stone ball” and Peter in Greek is petros that means “a pebble, like a small isolated rock found along a pathway or in a river bed.”  The Catholic Church really got that wrong!  But then many Protestants say that that Petra refers to “our public-confession of trusting-relying-faith” (traditionally done at water-baptism for salvation) that Peter was the first to make:  “You are the Christ (The Anointed One, Messiah/Savior), the Son of the living God.”  But Nathaniel was the first to get that same revelation as soon as he met Jesus in John 1:49:  “Rabbi, you are the Son of God!  You are the King of Israel,” long before Peter did!  So what makes Peter so special?  Why is he declared the first Pope by the Catholic Church?

Both groups are blind to the constant references Jesus made to the prophetic scriptures about Himself!  The Petra “massive bedrock” is “the living God,” the Father of Christ that David prophetically spoke of:  “For You are my Rock and my fortress” (a), which David also said of:  “You are my Father, my God, and/coupled the Rock of my salvation” (b).  God asks, “Is there a God besides Me?  There is no Rock; I know not any!” (c)!  And “There is none holy like Yahweh:  For there is none besides You; there is no Rock like our God” (d), and “Yahweh is my Rock and my fortress and my deliverer, my God, my Rock, in whom I take refuge, my shield, and the horn [symbol of strength] of my salvation, my stronghold and my refuge, my Savior” (e).  Also, “Yahweh, my Rock and my Redeemer, for . . . they remembered that God was their Rock, the Most High God their Redeemer” (f).

Spiritual Education, Great Wall quenching the Holy Spirit is borrowing from the world’s models of leadership & success, The ministers are the saints NOT the equippers, There is NO 5-fold ministry but 4 groups of equippers, Light shouldn’t be borrowing from darkness, We aren’t to be conformed to the world, Christ & His Spirit are only models to borrow from, God as Father Son Spirit is the Petra Massive Bed-Rock, The Godhead is Rock that builds their Church NOT petros little-stone Cephas Peter, Catholic false doctrine of papacy Pope Peter, Protestant false doctrine the Petra Massive Bed-Rock is Peter’s confession of faith