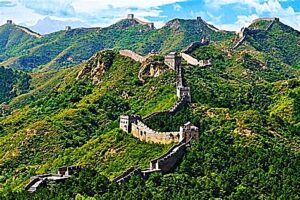 I recently watched a well-known American woman prophetic speaker at a local church on the topic of ‘revival.’  They had a half-hour of worship beforehand that was fairly charismatic but nothing I haven’t seen a 1000 times before, and nothing too exuberant.  Though a few people were, I didn’t feel very motivated to raise my hands let alone sing loudly, but the band was “professional” and they had 2 screens for the words to the songs and enthusiastic dancers with scarves & flags on the side.  They had “might and power” fairly down pat.

Before the pastor introduced the speaker, he said he was going to ring a ‘revival cowbell’ that a couple from Texas gave him.  He treated it like a sideshow gimmick, but it peaked my interest since I’m a professional drummer and percussionist.  I bet he was shocked because immediately after he started, the whole place jumped out of their seats and shot up  their hands, including me, and praised God at the top of their lungs – and not one instrument was playing!  But for some reason, after a couple of minutes, he stopped ringing it.  I saw him glance at his watch and he probably realized he was behind schedule!

There seemed to be a spiritual void afterwards that the pastor and speaker never did succeed in filling, no matter how loud they talked or preached.  She even put on a recording of music during a ‘legitimate revival’ she had witnessed years back in Toronto Canada, and said, “That’s the sound of revival,” and I admit it was absolutely heavenly beautiful!  She called for the audience to spontaneously sing by the Spirit a completely-different-in-kind “New song” and join in with the music.  It was so pitifully weak that she called for the recording to be turned up to help encourage us, but to no avail.  It sounded like the people had been fasting for weeks, beaten down from hunger and fatigue, and depressingly TRYING to praise the Lord.  That’s the weakness of the flesh’s “might and power!”

I was so perplexed by this that I just started asking the Lord why I felt this way and why it sounded like we were all so sick & tired, but during the ‘revival cowbell’ so alive?  Then I was shown a “Great Wall” of division between the ‘ministers/clergy’ up on the stage and the ‘audience/laity’ sitting in their seats (see the previous BLOG) and a crack formed in it when the ‘revival cowbell’ was ringing, but the “minsters/clergy” did not perceive it, or if they did, their “might and power” plans, programs, and schedules blocked them from meno abiding/remaining in the Presence of God that came when the ‘revival cowbell’ was ringing, when the Spirit’s power was actually moving the standing people to loudly praise with uplifted-hands.

Then I suddenly understood that part of “The Great Wall” was the so-called “ministers” own misconception that they were the ones hired to “minister” that night – see Leaders versus Body-Ministry.  The ‘on-stage’ minister’s “might and power” attempts at worship resulted in almost no spiritual effect, because they were in the flesh, even though they were doing/working FOR God.

Oh, they talked about moving in the Spirit, but didn’t understand that by them ‘hogging the ball’ they were keeping the actual ‘players delegated to sitting on the bench’ watching the coaches & referees & cheer-leaders instead of being on the court playing.  The Spirit’s flow was ‘bottle-neck’ restricted down to 1 or 2 people on stage ‘hogging the ball,’ instead of the Spirit being allowed to “work/do the work of ministry” thru all the saints in the Body-of-Christ right then and there.

But during that 1-2 minutes of that ‘revival cowbell’ ringing, the whole Body-of-Christ was ministering to one another reciprocally/mutually, the exact meaning of allelon ‘one another’ as in Galatians 5:13 “dia ‘thru the realizing channel of’ the unconditional-love, presently/ongoingly be serving/ministering-to one-another reciprocally/mutually,” and often heautou ‘each other’ as in 1 Peter 4:10, “as each of you has received a grace-gift, use it to serve/minister-to each-other mutually/reciprocally as good stewards of God’s manifold grace.”

The “ministers/clergy” didn’t understand that they were supposed to simply be equipping coaches and facilitators, passing the ball to the players to play the game, and making it easier for them to play the game well.  And so they “quenched the Spirit” just as Paul warned against in 1 Thessalonians 5:19. Finally, to compensate for the lack of zoe genuine-life in the church service, they tried all the harder with their flesh’s “might and power.”

Spiritual Education, Prophecy of Great Wall of Clergy versus Laity division in the Church quenching the Spirit, Clergy leaders hogging the ball from the real ministers that are the saints, Equippers are simply coaches & facilitators NOT the players themselves, Body of Christ Ministry, Without Genuine Life of Spirit in God’s Presence churches often fake it, Real Worship is by the Spirit NOT by flesh’s Might & Power, Real Worship is natural in the Presence of God