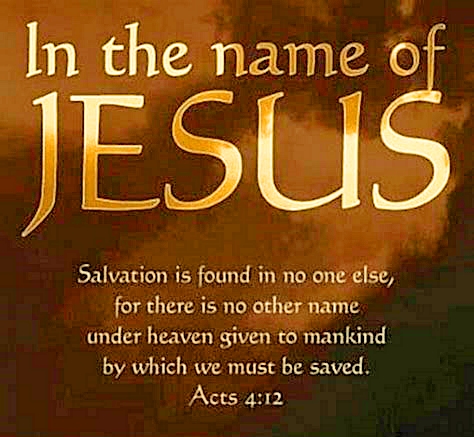 Uses of the phrase “in the name of”

Make sure to read the previous BLOG to see why this is important to you!

In the Eastern or biblical view, in some cases “in the name of” meant representing another being (e.g., Christ or God) or a person (e.g., Caesar) because of their physical absence, either in:

Today in the Western world, we still carry over some of the biblical and Eastern world’s concept of “in the name of.”  For example, searching for this phrase on the internet, I found “Delegation of authority represents the legal power to act in the name of the Regents of the University of Michigan . . . the authority derives from the general power given the Regents . . . within the Michigan Constitution of 1963 . . .” This is commonly called “power of attorney.” Also, policemen used to say “stop in the name of the law.” So, there is still this idea carried over into our culture of “in the name of” meaning “to represent instead or in place of the authority, will, and power of another, who is physically absent.”

The desired NT response to “the name of Yeshua“ as with the OT response to “the name of Yahweh“ (a) was to have trusting-relying-faith (b), which encompasses the ideas of accepting, receiving, welcoming, acknowledging, respecting, trusting, leaning on, relying on, turning toward by repenting or converting, testifying or confessing before men concerning (c), obeying, living by, living for, giving of thanks, representing or reflecting it, and finally by being immerse into or water-baptized into Christ.  See Obedient-Steps-of-Faith page.  For example, in Matthew 28:19, “water-baptizing the [newly-created] disciples in the [single] name of:  the Father kai and/coupled of the Son kai and/coupled of the Holy Spirit” is simply saying be “water-baptized in the authority of the Triune God since that phrase “the Father . . . The Sons . . . Holy Spirit” shows internal relationship between the 3 persons of the Godhead by the use of the special conjunction in Greek kai  and thus the whole phrase relates to the “in the [single] name of” phrase.  In other words, it’s not written as “in the [plural] names of” to indicate separate individuality or authority, but 3 components of 1.  God is ONE and is of One in-the-same authority!  <Notes> a) in many places, the NT equates the two:  Matthew 21:9 and 23:39, Mark 11:9-10 and Luke 13:35-38 and 19:38 and John 12:13 have “name of the Lord” but quote Psalms 118:26 that has “name of Yahweh”, b) 1 John 5:13, c) see Surrender Control.

“Saying and doing everything ‘in the name of Jesus,’ giving thanks to God the Father through Him” is the simplicity of the Christian life according to the apostle Paul in Colossians 3:17.  This is very close in meaning to 1 Corinthians 10:31.  When I was struggling with roommates and business decisions, I sought the Lord in proseuche conversational-prayer for ‘answers’ and when I drove to the park and opened my 8-translation bible just before the sunset, it fell open to a page with this verse underlined in the New Century Version – I had no recollection when I had underlined it.  It said:  “The answer is:  If you eat or drink or do anything, do it all for the glory of God.”  That one answer solved all my problems and I surrendered!  Jesus never intended for the phrase “in Jesus’s name” or “in the name of Jesus” or any other such phrase to literally be spoken as if it were a magical formula like “abra-cadabraa-ala-cazam” intended to put a seal of approval on any proseuche conversational-prayer (a) or “blessing” over a meal.  For real examples of real NT proseuche conversational-prayers without any such invocation, see Acts 4:24-30 and Ephesians 1:17-23, 22:20.  <Notes> a) John 14:13-14, 15:16, 16:23-24.

Instead the intent of “in Jesus name” was that we would proseuchomai conversationally-pray, heal people from sickness, cast out demons, meet together, or say/do anything else in a manner that represents Christ’s person (b) and authority (c).  For that reason I often translate this idiom “in the name/person/authority of.’  We should understand that as the Body-of-Christ, we are to reflect His image, representing and honoring Him as an ambassador or delegate using all His delegated authority for His glory.  In His stead or place or behalf, we carry with us everything that is in His name. <Notes> a) John 14:13-14, 15:16, 16:23-24, b) His character, reputation, desires, purposes, will, c) His rightful ownership and enabling-power over all things.

As Christian musicians, do we really want to carry on religious traditions that we no longer know the meaning of, almost using the saying “in the name of Jesus” as an incantation, spell, or rabbit’s foot?  Or we could simply say what they meant:  “in the personal character, authority, and power of” as a rightful ambassador, witness, or representative of Christ to the word.  We are NOW supposed to be the Holy handwritings, “The Word of God,” to this dying world – see Logos Word of God – BT20 and by Christ’s delegated authority to us, we should be doing “greater works” than even Christ did per John 14:12.  Jesus has been given all authority in heaven and earth and has delegated this to His Body for Ministry.  He has handed of the football to us, but will we confidently run with it by the enabling-power of the Holy Spirit or fumble it?

Part of The Great Wall quenching the Holy Spirit, is many Church leaders & teachers are ‘ball hogs’ because they see themselves as the ‘ministers’ when Ephesians 4:11-12 says the congregation “saints” are the “ministers” and the 4 others groups (the Greek doesn’t support a ‘5-fold ministry’ – See Note ‘C’ of Tongues & Interpretation – BT4) are simply Coaches & Facilitator “equippers.”  These ‘ball hogs’ ignore Romans 12:3-8 and many other Body-Ministry portions of the New Testament.

Lord, open our eyes and ears to see and hear The Truth that You are and to understand the great authority we have been given “in Your name/person/authority” to do fully represent You against the forces of darkness in our lives and those around us, so that “Your kingdom can come and will be done on earth as it is in heaven.”