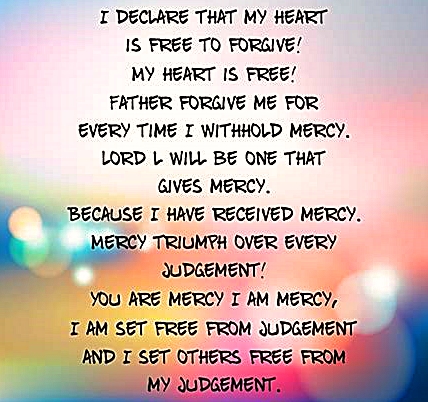 Forgiveness throws away “the books of the Law”

The Hebrew and Greek words for “forgive” and “forgiveness” mean to send away the “fair and just” Law and its critical and separating “pointing finger” and “separating division” of judgment, sentencing, and condemnation from the person we are saying is being “unfair and unjust” to us, but also to send away this judgment from us!  It doesn’t just mean to “stop or suppress our negative reaction to them” as the English dictionary says and worldly counselors teach, but instead to “lift, carry, or take away, throw away or cancel their trespass, debt, or sin” as the original bible languages say to do.

The bible deals with the source of our negative feelings.  God gets at the root of the problem, not just “casting our cares upon Him” but “casting away the ‘fair and just’ judgment of sin” we are holding against others and subsequently against ourselves.  But how?  We can “blot out their transgressions from the ‘record-of-wrongs’ we have kept against them, or better yet, throw away this entire inventory-record-of-debt, no longer counting their sins against them, and remembering them no more,” just as God does for those who receive His free grace-gift of unmerited, unearned, undeserved, unconditionally-loving-favor-of-grace, paid for by Christ’s perfect sacrificial justice. Grace is the opposite of Law!  Christians are supposed to be “absolutely in fact no longer hupo subordinately-under-the-authority-of the Law but under the Grace” according to Romans 6:14-15.

God no longer “throws the book at us” on The Great and Terrible Day of the Lord – Judgment Day for the world, because He “threw away our transgressions from the book” and instead wrote our “name in the Lamb’s book of zoe genuine-life.”  This is ONLY true for those who have totally-surrendered to Jesus and are saved by Him – see Salvation!  Instead of continuing to carry the burden of “fretting, worrying, and complaining about evildoers and demanding justice against them,” the Lord tells us to “cast this care upon Him, committing it by rolling the burden off our back onto His back to bear or carry.”  The Lord is the legitimate Judge who should only be carrying this great burden.

Where do we “lift, carry, take, or throw away the records-of-wrong or debt” to, such that it won’t be available for us to continue judging others from?  Answer:  onto the back of Christ who takes it to the cross and pays for the “unfairness and injustice” of ALL sin with His own life, so that it is forever blotted out and cancelled from their record but ours too!  Yes, Jesus promised in John 20:23 “If you forgive the sins of any, they are forgiven them; if you withhold forgiveness from any, it is withheld.”  What an awesome but terrifying power!  The parallel passage is Matthew 16:19 and 18:18 “I will give you the keys of the kingdom of heaven, and/thus whatever you bind/tie on earth shall be bound/tied in heaven, and whatever you loose/untie on earth shall be loosed/untied in heaven.”

Forgiveness ‘unties the burden’ of judgment and “the Law of sin and death” off BOTH of our backs by rolling it ALL onto Christ’s back so that He can destroy it ALL on the cross to set us BOTH free. God really does know how unforgiveness hurts BOTH of us!  But forgiveness indeed “sets the captives free” per John 8:36, Ephesians 4:8 citing Psalms 68:18, and Luke 4:18 citing Psalms 146:7 – the very mission of Christ, and part of that freedom is to be “set free from the yoke of captivity to the Law” and its judgment, per Roman 7:6, 23, Galatians 3:23 and 5:1.

As Christian musicians, why do we want anything to do with the Law, which is 97.4% of the OT – see Logos Word of God – BT5a, by “pointing the finger” of critical judgment against another, when that Law points 3-4 fingers back at us to judge, sentence, and condemn us?  Christians are supposed to be absolutely-in-fact no longer subordinately-under-the-authority-of the Law but under Grace!  That’s what is shown to us, so that’s what we are to show toward others!  We have power to “bind/tie” their sins to them, but then it keeps that sin bound/tied to us.  But if we “loose/untie” the burden of the Law off our back and theirs and roll it over to the Lord instead, He will carry/bear it on the cross and destroy it by His blood to cleanse us both and set both of us free from the captivity of that sin!  That is “Mercy/Grace triumphing over Judgment/Law” per James 2:13.  When we “throw the book away” on others, it is thrown away for us too!  Wow!

Lord, set us captives free through the power of grace in and through us, setting us free from the Law and illicitly pretending to be a judge, when You are the ONLY Just Judge and You graciously wait until the very last Day to do this!  Give us Your nature of Unconditional-Love that forgives others even from the cross as You did!

Spiritual Education, Unconditional Agape Love, Forgiveness instead of Judgment, Emotional Healing, Living like Christ, Greek and Hebrew words of forgiveness, Forgiveness is the opposite of holding judgment against them, Grace is opposite of Law, God’s solution deals with the problem not just symptoms, Cast our cares upon the Lord including the sins of others, Roll judgment off our back onto Christ’s so He can destroy it at the cross, Unforgiveness comes back on us, We are to loose the burden of sin off others backs, Forgiveness sets the captives free