Water-Baptism – BT5:  Jewish water-baptism was NOT something new to Jewish-Christians

Water-Baptism – BT5:  Jewish water-baptism was NOT something new to Jewish-Christians 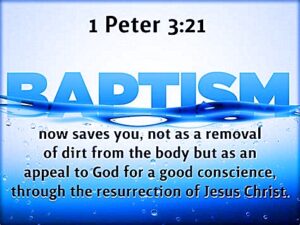 Water-Baptism – BT5:  Jewish water-baptism was NOT something NEW to Jewish-Christians

In the Old Testament (OT), ritual purification of a thing or person was always by complete immersion so that all parts of the thing or person were cleansed by the ritual, especially considering that the main Hebrew word mikvah was used of the “collection or gathering of the waters” (a). King Solomon’s temple had a 15 foot diameter x 7.5 foot high basin along with 10, 240-gallon basins for this ritual (b). The mikvah is also the basin or “vessel” in which the ceremonial washing occurs. Ancient mikvahs dating from before the late 1st century can be found throughout the land of Israel as well as in historic communities of the Jewish Diaspora (c). The Jews believed that immersion in water was absolutely necessary and that the water must touch every part of the body to become ritually katharos ‘clean, purged, pure, unmixed.’ <Notes> a) Genesis 1:9, b) 1 Kings 7:23, 7:38 and 2 Chronicles 4:2, c) after the temple was destroyed in 70 A.D.

The mikvah is so important to the Jews that an Orthodox community is required to construct a mikvah before building a synagogue. The “living waters” collected from a spring or a cistern collection of water are the only waters considered katharos ‘clean, purged, pure, unmixed’ for use in the mikvah (a), which is thus considered a hagion “holy place” (b). Leviticus 15:5-10 details the process of total immersion of the whole person (c), or total immersion of clothes or other things that have been kabac defiled. In modern Judaism, the OT mikvah is used interchangeably with rabbinic tevilah (c). <Notes> a) Leviticus 11:36, Numbers 19:17, b) Leviticus 16:24, c) rachatz or rabbinic tevilah; louo means “bathe or wash the whole person, but not a part of them as would be the word nipto,” as distinguished in John 13:10.

What about regular Jews who somehow became “unclean” and what about the [by default] “unclean” Gentiles that camped with the Jews?  Under Leviticus 16:19-34, the Day of Atonement would cleanse them from ALL their sins, but God also had a “permanent ordinance” for frequent cleansings (a), lest “that person must be cut off from among the community, because he has polluted the sanctuary of the Lord; the water of purifications were not sprinkled on him, so he is unclean.” <Notes> a) Numbers 19:20.

Synonymous to rachatz/louo bathing/washing above is tabal/baptizo or baptismos, which means “to plunge or immerse.” Elisha, the prophet, told Naaman, the commander of the king of Syria who had leprosy, to go rachatz/louo bath/wash in the Jordan 7 times to made “clean” and be healed. . . Naaman’s servants said “It seems you should be happy that he simply said, ‘rachatz/louo bath/wash and be clean’. . . So Naaman went down and tabal/baptizo plunged/immersed himself 7 times in the Jordan according to the saying . . . (a). We can see this synonymous link between terms in the NT “doctrine of baptismos baptisms” of Hebrews 6:2 and 9:10 written to Jewish-Christians, that link OT practices of shataf or netilah yadayim/baptizo washing by immersion of hands and the kabac/baptismos washings by immersion of cups, pots, and kettles (b). <Notes> a) 2 Kings 5:10, 13-15, b) Mark 7:4.

According to Strong’s Lexicon, the word baptizo for “plunge, submerge, immerse, make fully wet, wash” is slightly distinguished from bapto for “dip into as to cover wholly with a fluid, to moisten a part of a person, to stain or dye to color something.” To show this difference, in 200 B.C., Nicander, a Greek poet and doctor wrote a recipe for making pickles: “The vegetable is first bapto dipped-temporarily into boiling water, but then baptizo immersed-permanently into vinegar.”  Dipping doesn’t affect permanent change!

Tevilah rabbinic baptism by immersion was (and still is) a strict ceremony! The person has to remove anything that would be an obstacle between the body and the water. Any intervention that prevented the water from reaching a part of the body rendered the immersion invalid. For example, all clothes and jewelry have to be removed, and women have to remove braids, hair accessories, make-up, nail polish, or anything else but the body and the water. Jewish Law requires at least 3 witnesses (usually magistrates) to be present for certain immersions, as ordained by the Sanhedrin in the time of Christ. Then the priest examined the situation to confirm the presence of any impurities and provided instruction for cleansing. Later, after the physical cleansing was completed and after the impurity was eradicated, additional rituals were performed for further ceremonial cleansing. When all of this was completed, the priest could finally declare that ‘cleanliness’ had been re-established. The Torah required full immersion for the cleansing ceremony to be valid.

The same exacting care went into gerim Gentile proselyte baptism, but with even more requirements!  The proselyte must begin to learn the Jewish religion, Law, and customs, and begin to observe them, which generally takes at least one year to experience each of the Jewish holidays. After the teaching is complete, the proselyte is brought before a rabbinic court, which examines the proselyte and determines whether he or she is ready to become a Jew. If the proselyte passes their oral examination, the rituals of conversion are performed. If the convert is male, he is circumcised. If he was already circumcised, a pinprick of blood is drawn for a symbolic circumcision. Both male and female converts are made ceremonially “clean” through tevilah/mikveh whole-body self-immersion via total rachatz/louo bathing/washing of the body – the witnesses weren’t allowed to touch them.

The Gentile proselyte would make a “confession of The-Trusting-Relying-Faith” before the witnesses and then would totally immerse themselves by placing themselves in a sitting or fetal position under the water with a witness or “baptizer” doing the officiating. They would then stretch themselves back into a standing position (a), reciting another blessing as they rose from the water. Water-baptizing “in the name of” was a reference to the witnesses being present – it declared the authority from whom they were water-baptized. The convert is then given a Jewish name and can now be introduced into the Jewish community. The children of proselytes need not go through these rituals. Only then can the proselyte enter into the Temple to worship God and offer sacrifices for their sin. Non-public or “secret” (private) immersions were not acknowledged as valid. Can you see why early Christian water-baptism was always a very public testimony of their “confession of The-Trusting-Relying-Faith”? <Notes> a) “straightaway out of the water,” just as Jesus did at His water-baptism.

Did the Jews of Jesus’ day believe this actually purified the Gentiles?  You bet! According the debates by Shammai and Hillel, both contemporaries of Jesus, a “Gentile is made … like a child new born.” The Talmud teaches that a person enters the waters as the “womb of the world,” dies to himself, is buried, and emerges on the other side a “little child just born” or “child of one day” and thus hagios sanctified/separate or “clean” from the pagan “unclean” world. Water-baptism symbolized moving from a state of impurity to purity. This sure sounds like a “born again” experience to me – see Salvation – BT8.  Jesus was likely using terms that Nicodimus should have been very familiar with!  In fact, rabbinic literature uses the term “born again” in 6 places, each of them for a lifechanging experience, water-baptism: 1) of Gentile converts, 2) At the crowning of a king, 3) At a boy’s embracing of God’s covenant at 13, 4) at marriage, 5) at becoming a rabbi, and 6) at becoming the head of a rabbinic school.

Tevilah rabbinic baptism by immersion required a day of repentance. According to 12th century Moses Maimonides, regarded by many as the greatest Jewish philosopher, declared that ritual cleansings “are to be treated as divine statutes which baffle human understanding . . . that the regulations concerning uncleanness and cleanness are decrees of the Holy Writ, and do not belong to the subjects which a man can rationally explain. They thus belong to the category of statutes. Similarly the act of immersion to rid oneself of impurity belongs to that class of ‘statutes’ because defilement is not material filth that can be removed by water. It is but a decree of the Holy Writ, and the removal is dependent upon the intention of the heart. (a). On that account the Sages said, ‘If a man immersed himself without specific intention, it is as though he had not immersed himself at all.’  <Notes> a) This is the exact language of 1 Peter 3:21 “Water-baptism . . . now saves you, not as a removal of dirt from the body but as an “a request/appeal to God for a clear conscience free of sin” though I’d rather take the Greek ‘as is’ for God working together with the person because of their surrender to God to help them mentally experience their reaching of God, but ALL of this saves them only because it is REALIZED thru the resurrection of Christ” – see Water-Baptism – BT4.

The Encyclopedia Judaica describes repentance as: “Repentance is a prerequisite for divine forgiveness:  God will not pardon man unconditionally but waits for him to repent. In repentance, man must experience genuine remorse for the wrong he has committed and then convert his penitential energy into concrete acts. Two sub-stages are discernable in the latter process: first the negative one of ceasing to do evil and then the second, the positive step of doing good. It is a call to return to God, or t’shuvah ‘to return.’ The motion of turning/returning implies that sin is not an ineradicable stain but a straying from the path, and that by the effort of turning – a power God has given to all men – the sinner can redirect his (or her) destiny.”

Is it any wonder that people confessed their sins at their water-baptisms per Matthew 3:6, Mark 1:5?  It was standard practice for repentance in all forms of cleansing – see also Surrender Control.  There is so much more written on the details of water-baptism, but you can see from the facts here, that total-body immersion water-baptism was actually a requirement for salvation – it simply was expected!