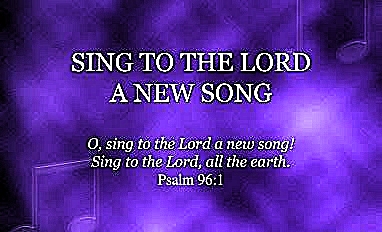 I just love the Helps Word-Studies definition for odes from www.biblehub.com:  “This word is used in the NT for spontaneous, impromptu (unrehearsed) melodies of praise – not merely sung about [or FOR] God but TO God from a Spirit-filled heart.  Spirit-inspired songs minister to God and exhort/encourage others, giving testimony about the living God to other worshipers.”  Man, after all the study I’ve done on this topic, they absolutely nailed it!

As important as Spirit-composed hymns and psalms were once upon a time, especially when they are now sung/played as praise to God from a grateful heart by Spirit-filled, anointed, prophetic singers and/or instrumentalists, other than these 2, there is still a completely different-in-kind, superior New (a) Song ode that we should all embrace.  This is what I call the “Close Encounter of the 3rd Kind” of Church worship music and it’s far superior by definition!  <Notes> a) chadash, kainos: fresh, completely different-in-kind, unprecedented, sharing nothing with its predecessors, unique, and superior.

Paul only uses the Greek word meizon “greater” (a) once regarding the greater importance of prophesying in the Church assembly rather than speaking in Spirit-kind-of tongues without interpretation, because the Church assembly, instead of the individual as with tongues, is more apt to be built up or edified.  Tongues are only useful to others in a Church setting if their speaking to the assembly is also interpreted by themselves or others so that a revelation, knowledge, prophecy, or teaching by God can then be understood and interacted with so that all can learn together and be encouraged (b).  So generally speaking prophecy in the Church is of “greater importance,” thus Paul’s urging to “zealously desire the grace-gifts, but more so that you may prophesy” (c). <Notes> a) meizon, the comparative adjective of megas for great:  context defines if larger or great in size, age, number, abundance, importance or eminence or majesty, notability, arrogance, strength, sacredness, excellence, splendidness, etc., b) 1 Corinthians 14:5-6, 26-31, c) 1 Corinthians 14:1, 39.

So why is Spirit-kind-of odes of hymns and psalms superior by the definition of kainos?  Remember that God doesn’t just want to take the same-old-same-old and somehow make it better, certainly not be taking an old dirty man and putting fresh clean clothes on him!  No!  He creates a New kainos Man and then gives him New kainos Clothes, the robes of Christ’s righteousness.  God doesn’t take old, fleshly songs and spruces them up for sacred Church music!  He even has a better plan than taking previous, fresh rain or spring water that once fell from Him but then has been sitting in a pond or broken cistern, which makes it no longer “living,” and somehow making it better by freshly raining into it or replenishing it with spring water, thus by adding more “living water” to it to dilute the stagnant water.  Sure, He can do that!  Yes, old anointed hymns and psalms can be reinfused by anointed singers and musicians!  And certainly Paul says there is a place for this.  Anointed Old Testament worship also had this.  We can see the later disdain God had for “going through the motions” worship that originally was fresh, spontaneous, prophetic, and anointed in the time of David!

But Spirit-kind-of odes are superior for the same reason prophecy is of “greater importance!”  Because anointed music that is also spontaneous in/by/with the Spirit right on the spot is also prophetic – that’s right, it communicates the directly-spoken/heard prophetic rhema words of God to us as a grace-gift of prophecy and through us as a service and finally to others to effectually work in them for the common good (a).  That is also Paul’s reasoning in 1 Corinthians 14 above!  It’s not about you!  Yes, the Lord wants to bless you, inspire your composing and playing to make it anointed! Yes! Yes! Yes!  And this SpiritMusicMeetups BLOG website needs to fully explore this together in fellowship with others!  But God wants to speak through your mouth and your instrument to others to effectually work in their lives.  Every Body-of-Christ ministry passage speaks of this!  That is the whole point of every passage that speaks of the grace-gifts of the Spirit!  And that’s exactly what prophecy is intended for – to build up the Body-of-Christ! <Notes> a) 1 Corinthians 12:4-7.

Now below we will find that this superior, greater, Spirit-kind-of ode or anointed New Song is still prophetic whether one prophetic word is sung or not!  Remember Spirit-kind-of odes include Spirit-kind-of psalms and they need not have even one word sung by definition!  The ultimate purpose of SpiritMusicMeetups is to move anointed musicians into prophetic, spontaneous music!  After you read those pages and what’s below you will be itching to start!