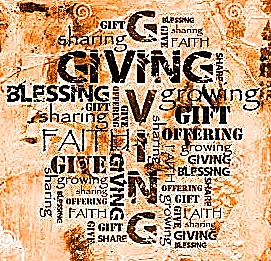 Paul continues his “defense” in 1 Corinthians 9:7-10, 13-14 using more analogies, essentially saying:  “Don’t soldiers get paid for their service?  Don’t vineyard planters get to eat some of the fruit from it?  Don’t shepherds get some of the milk?  This isn’t just my authoritative words!  The Law of Moses talks about not muzzling the ox when it treads out the grain, but God’s not talking about oxen, but about plowman and threshers both having hope in sharing in the crop.  Don’t the temple and sacrifice workers get their food from a portion of these sacrifices?”  The Torah Law of conditional-favor specifies this!  Not only that, but Paul adds: “The Lord had authoritatively ordered (a) that those who are routinely proclaiming the ‘Great News’ gospel to be living of/from the Great News” (b).  Remember from the context Paul is absolutely not arguing for this “order” to be applied to NT ministers such as their team.  Remember he is saying all this to drive home his main point – that they are inconsistent in their freewill giving to others and worse – selfish! <Notes> a) diatasso: fully, thoroughly, systematically, authoritatively ordered, b) 1 Corinthians 9:14.

Furthermore, there is no record of this diatasso “authoritative order” being made by Jesus.  Also, the only time Jesus used the word diatasso is when He ordered a family to feed the little girl he raised from the dead (a).  So, then where did Paul hear this?  Was Paul paraphrasing his great understanding of the Torah Law of conditional-favor and adapting it to his unconditional-favor “Great News” gospel, since he talked about this right after quoting Moses’ Law?  Was it part of the Oral Law, the traditions of the elders?  Can we be so quick to assume that the “Lord who had authoritatively ordered” compensation here refers to Jesus Christ, since Paul just referred to the Law of Moses?  I’ve seen too many Christians say just that!  <Notes> a) Luke 8:55.

Fortunately we know the answer, because Paul is in the habit of repeating himself.  He already said nearly the exact same thing to his evangelist trainee in 1 Timothy 5:17-19 regarding “doubling the honor” of “elders who stand-before-others (superintend) well, especially those who labor in preaching and teaching.”  Here Paul again quotes the Law of Moses about “muzzling the ox” and couples to it (using kai) “the laborer worthily deserves his wages.”  Now, this is significant because both parts are coupled together implying that they both come from the OT Law of Moses.  Furthermore, Paul is not quoting in 56-57 AD what the Lord Jesus had said in a completely different writing of Luke 10:7 later in AD 80.  It’s impossible, but it doesn’t stop too many bibles and commentators from implying this.  It’s much more likely that the same “Yahweh ‘LORD’ of scripture” in 1 Timothy 5:19 is the “Lord” in 1 Corinthians 9:14!

In both of these verses, Paul uses the OT scripture to argue for a current practice under the New Covenant.  This is nothing new!  Everywhere Paul cites OT scripture in his writings, he does so to prove how they were actually written for us in a future time, and particularly the topic that he is presently discussing (a).  But even though his partner Barnabas recounts all of the trusting-relying-faith of the OT forefathers in Hebrews 11:1-40 as an example to us, he concludes: “Though commended because of their trusting-relying-faith, they did not receive what was promised, since God had provided something better for us.  Therefore, since we are surrounded by so great a cloud of witnesses, let us . . . look to Jesus, the founder and perfecter of our trusting-relying-faith.”  So, once again, we see OT scripture and examples used to point us forward to what is better, and so never to go backwards – this is a foundational problems many Christians and churches have that is building The Great Wall quenching the Holy Spirit! <Notes> a) 1 Corinthians 9:10; 10:6, 11; Romans 4:23-24, 15:4.

Then why did Luke 10:7 record in AD 80 what Paul said years earlier around 56-57 AD in 1 Timothy 5:19?  Jesus said in Luke 10:1-8 when He sent 72 out in front of His own ministry: “Carry no moneybag, no knapsack, no sandals, and greet no one on the road (being shrewd as a snake) . . . remain in the house (the ones you find peace in), eating and drinking what they provide, for the laborer worthily deserves his wages, but do not go from house to house.  Whenever you enter a town and they receive you, eat what is set before you.  Heal the sick in it and say to them, ‘the kingdom of God has come near to you.’”  Similarly Jesus said this to 12 apostles in Matthew 10:5-10, written in 70AD, again long after 1 Timothy writing:  Jesus sent the 12 apostles out to only the Jews to preach that the kingdom of heaven is at hand, heal the sick, raise the dead, cleanse lepers, and cast out demons.  He told them to not fill their money-belts or bring a lot of extra clothing, “for the laborer worthily deserves his food” per Matthew 10:10.

Paul simply can’t be quoting either Luke or Matthew’s gospel because Paul wrote long before they wrote their gospel accounts.  It’s possible in 48 AD when Paul met the other disciples in Jerusalem that he heard about Christ’s teaching on this, but Paul in Galatians 2:6 said they “added nothing to me,” so that rules that theory out!

It’s much more likely that 1 Timothy, Luke 10:7, and Matthew 10:10 all are either quoting a Greek OT Law that we simply don’t have a manuscript of, or more likely are quoting the Oral Torah.  The latter is what I’m seeing the scholars saying: “‘The laborer worthily deserves his wages’ appears to have been the prevailing interpretation of Deuteronomy 24:14-15 according to the Oral Traditions of the Jews during the 1st c. and beyond” citing the 1st c. Jewish historian Flavius Josephus who made the same connection of the “ox” to “workers wages.”  In the Babylonian Talmud several hundred years later that codified the Oral Torah, add the stipulation that they must be “full-time” employees to be entitled to these “fringe benefits,” saying that “He may eat the produce on which he is working only if he works with both his hands and his feet:  The worker is analogous to an ox.  Just as an ox is entitled to nibble only if he is working with forelegs and hind-legs, so the worker may eat only if he is engaged in work that requires both hands and feet.”  Leviticus 19:13 and Malachi 3:5 also talk about compensating the worker fairly and in a timely manner, which James 5:4 also refers to.  So both Jesus and Paul are likely quoting from the Oral Torah.  Therefore, the “Lord” who diatasso “authoritative orders” this is none other than Yahweh of the OT, and all this is simply OT tradition!  Since this is likely the case, is Paul then telling future Gentile pastors to follow OT Law and Oral Traditions that were written for Jews or Gentile converts to Judaism?  That’s what we will explore next.